A Brief History of Jackson Hole 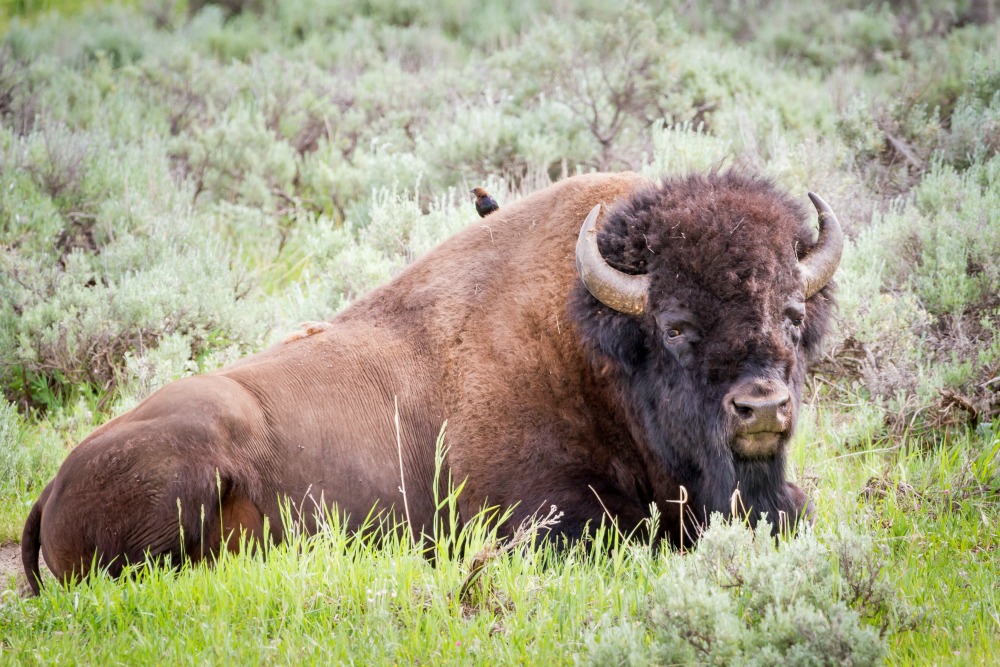 Wildlife has played an important role in the history of Jackson Hole. The abundant wildlife lured early explorers to the valley. The Native Americans came to hunt buffalo and other large game, and the first European and American visitors came to collect beaver pelts.

Before 1800, the only people who traveled into Jackson Hole were the Native American tribes who spent the summer months hunting the wildlife in the valley and the area surrounding it. Among the tribes that trailed through the valley were the Shoshoni, Crow, Blackfeet, Bannock, and Gros Ventre. These early visitors to Jackson Hole left behind evidence of their practices and culture. Present day history scholars enjoy discovering these artifacts in the hidden spots of the valley, and the Jackson Hole Historical Society & Museum share the results of their efforts with the public.

In 1803, Thomas Jefferson organized the Lewis and Clark Corps of Discovery expedition to explore the unknown territory of the Louisiana Purchase. The expedition traveled up the Missouri River and crossed the Rocky Mountains far to the north of Wyoming, in Montana, on their trip to the Pacific Ocean. During the return journey in 1806, John Colter, one of the members of the Expedition, headed back into the mountains to scout for a fur trading company. On a trip to the Crow, Colter probably entered Jackson Hole in the winter of 1807-8. He traveled into Crow territory to persuade them to trap for valuable beaver pelts, which were used for the fashionable hats of the era.

When other trappers followed Colter’s example, Jackson Hole became one of the prime areas of interest. Most of the famous mountain men that trapped in the West in the early 1800's traveled the trails that crossed the valley: Jim Bridger, Jedediah Smith, William Sublette, and David Jackson were among them. They traveled through the area going to and from the annual summer Rendezvous where they traded their beaver pelts and celebrated a successful trapping season. But it was David Jackson who gave his name to the valley when he supposedly spent the winter of 1829 on the shores of Jackson Lake. For the mountain men, a "hole" indicated a high valley that was surrounded by mountains, and William Sublette, who was Jackson 's partner in an early fur company, referred to the mountain valley along the Snake River as Jackson 's Hole. The mountain men were responsible for many, if not most, of the names in the valley. It was French Canadian trappers who named the three prominent peaks of the area "Les Trois Tetons," or the three breasts: Grand Teton, Middle Teton, and South Teton.

By 1845 the fur trade had drawn to a close because the silk hat had replaced the one made of beaver felt. Then, Jackson Hole reverted to the summer habitation of various Indian tribes and an occasional government expedition. The Hayden Surveys of 1871, 1872, and 1878 officially named many of the important landmarks. Leigh Lake and Jenny Lake were named in honor of the guide for the 1872 expedition — Richard "Beaver Dick" Leigh. Beaver Dick was one of the last of the mountain man trappers who lived in the valley. Jenny Lake was named for his wife, a Shoshoni woman, and Leigh Lake was named for Beaver Dick himself.

As a part of the Hayden Expedition of 1871 and 1872, William Henry Jackson took the first photographs of the Teton Mountains and Yellowstone. His photographs were important evidence to help convince the federal government, in 1872, to protect the Yellowstone area as the world's first national park.

After the creation of Yellowstone, big game hunters and the first "dudes," including foreign royalty, visited the area. Again the abundant wildlife brought people and helped to spread the fame of beautiful Jackson Hole.

Since wildlife flourished in the valley, settlers hoped that domestic animals would flourish as well. By the late 1880's, they began to trail into the "Hole." Some of them followed the Gros Ventre River into the valley, and a brave few cleared a wagon route over Teton Pass, following the trail of Indians and mountain men. By the 1890's, the villages of Kelly, Wilson, and Moran had been born. In 1892, two years after Wyoming became a state, Bill Menor moved into Jackson Hole, the first settler west of the Snake River. He established a ferry that remained for many years the only dry way to get across the Snake River. His cabin, in what is now Grand Teton National Park, has been preserved to house artifacts of the early settlers in Jackson Hole.

In the 1890's, cattle ranching became the major focus of the area, and with cattle ranching came a larger and more permanent settlement. The town of Jackson was named in 1894 and acquired a plan for streets and major buildings in 1900. Some of the buildings and houses of that early era remain a part of Jackson today. The present-day visitor can find them around the Town Square and along the streets to the south of the square. The wooden sidewalks that surround Town Square are maintained in special commemoration of the valley's colorful history, and the elk antler arches on the square itself celebrate the magnificent wildlife of the area.

Concern for wintering elk began early in Jackson Hole. The severe winter of 1908-9 brought the concern to a head; thousands of elk were starving in the valley. The townspeople, with the help of the state of Wyoming, bought hay to help the animals through the winter, but the following winter was no better. Through the crusading efforts of Stephen Leek and his photographs, the U.S. Biological Survey Elk Refuge was established in 1912 with an allotment of one thousand acres. Today the National Elk Refuge, the direct descendant of the original refuge, contains nearly 25,000 acres and feeds over 7,000 elk every winter.

Women in Wyoming have been voting since 1869 when the legislature of Wyoming Territory met for the first time, the first government in the world to grant women full voting rights. But in 1920, the year the 19th Amendment to the U.S. Constitution gave women across the nation the right to vote, Jackson added to its legendary history by electing an all-female city council, the first anywhere in the United States. The elected women of Jackson proved their mettle by increasing the town treasury, improving the water system, getting rid of the garbage in the streets, grading the roads, and beautifying the cemetery—a very ambitious agenda.

In 1929, Grand Teton National Park was created and dedicated. The park at that time included the mountains in the Teton Range and a narrow strip of land that contained the major lakes at the base of the peaks. But that was enough to develop the tourism industry, which has now replaced cattle ranching as the primary economic base of Jackson Hole. In 1950, the park was enlarged to include the Jackson Hole National Monument, established in 1943. The rededicated park contains 52 square miles, acquired by John D. Rockefeller, Jr., during the 1930's and 40's. Grand Teton National Park now totals 485 square miles or 310,000 acres.

As the fame of Jackson Hole with its beautiful scenery and fascinating wildlife grew, more and more visitors found their way into the valley. The mild summers added river rafting and hiking and horseback riding to the allure of hunting and fishing in the valley. In 1937, valley residents built a ski tow at Teton Pass and winter sports were added to the valley's charm for visitors. In 1939, Snow King Resort, on the mountain above the town of Jackson, was the first ski facility in the state of Wyoming. 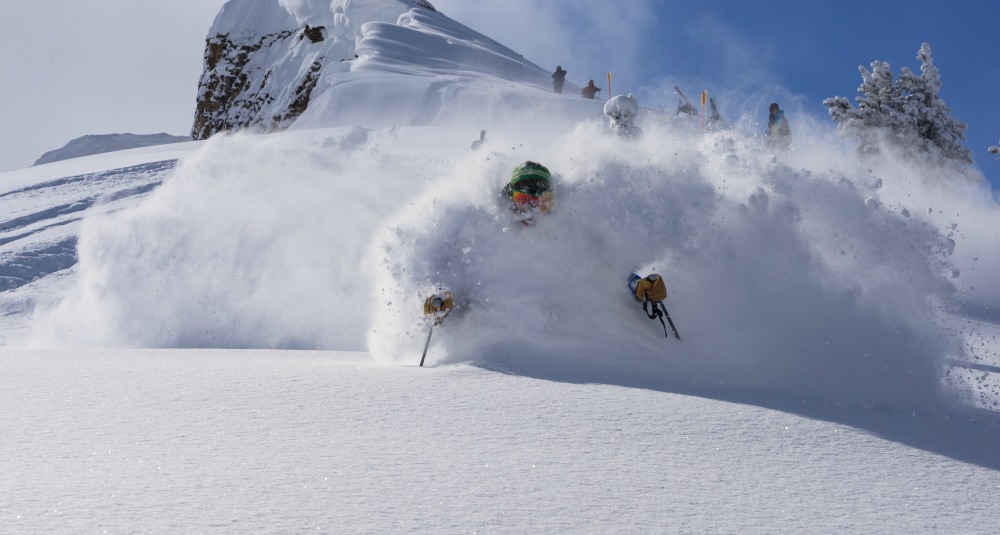 Today three major ski areas have made Jackson Hole world famous for excellent skiing and winter sports. At the Jackson Hole Mountain Resort, Rendezvous Peak has the largest vertical rise served by one lift system in the country—at 4,139 feet above Teton Village. Grand Targhee Ski and Summer Resort, near the Idaho border, is famous for its deep and plentiful powder snow, and Snow King Resort serves locals and tourists alike with the valley’s only night skiing.

Some Images Provided by the Jackson Hole Chamber of Commerce

If you are interested in learning more about Jackson Hole history please visit the Jackson Hole Historical Society & Museum website. (With the hyperlink established at that point with our website.

Reservation agents are online and ready to help. Would you like to start a chat?