Jackson Hole is a valley encompassed by mountains. 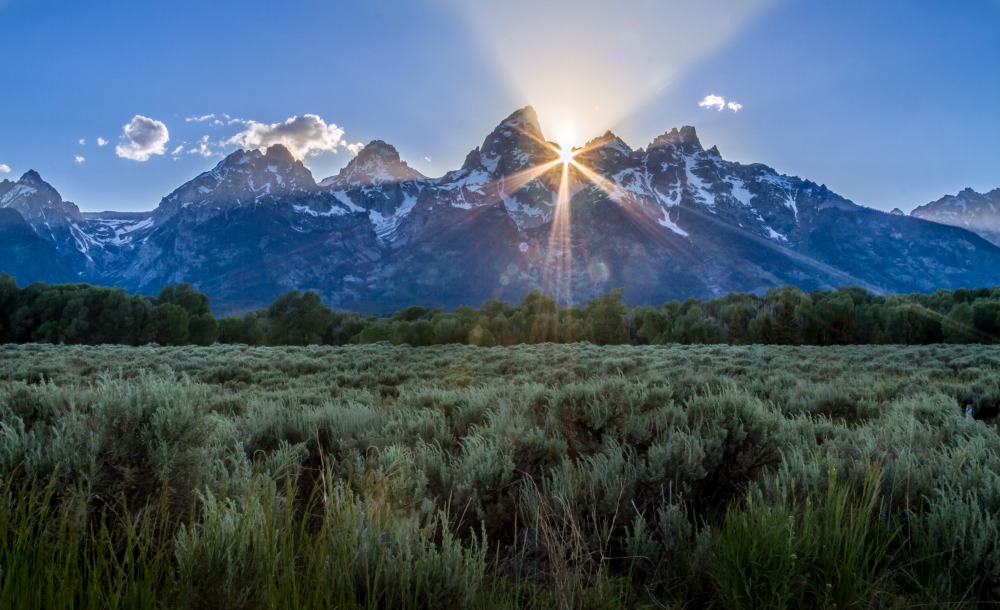 Where is Jackson Hole?


The valley is 48 miles long and 8 to 15 miles wide, and the valley floor slopes from 6,779 feet above sea level in the north to about 6,069 feet at the southern end.  The Snake River, originating in the high country of Yellowstone, makes its meandering way through the valley, fed by streams and rivers, such as the Gros Ventre River and Flat Creek.  Several lakes lie along the course of the Snake; among them is large Jackson Lake.  Along the western side of the valley, the famous Teton Mountains rise into the sky, a sharp soaring of rock without the preamble of foothills to separate the massive mountains from the valley floor.   Grand Teton, the tallest mountain in the range, is 13,772 feet above sea level, towering over Jenny Lake at its base.  In the valley to the east, The Gros Ventre (Big Belly) Mountains roll up a little more gently from the valley floor.  By contrast with the impressive Tetons, the tallest mountain in the Gros Ventre Range is Doubletop Peak at 11,682 feet, some twenty miles as the crow flies, southeast of Jackson Hole.

Grand Teton National Park occupies most of the valley of Jackson Hole, preserving the towering peaks of the Teton Valley Mountains and the beautiful glacial lakes.  The native wildlife includes moose, mule deer, pronghorn antelope, elk, grizzly and black bear, bison, and trumpeter swans.  To the delight of the park's visitors, many of the large animals roam undisturbed across the valley floor, and numerous trails lead into the mountains to satisfy inquiring minds.  Today the park includes 485 square miles or 310,000 acres.

The town of Jackson is located toward the southern end of the valley, nestled between the Hoback Range, which contributes Snow King Mountain to the southern boundary of the valley, and East Gros Ventre Butte.  The butte is one of several that punctuate the valley, varying the flatness of the Snake River plain with the rocky humps of ancient landforms. 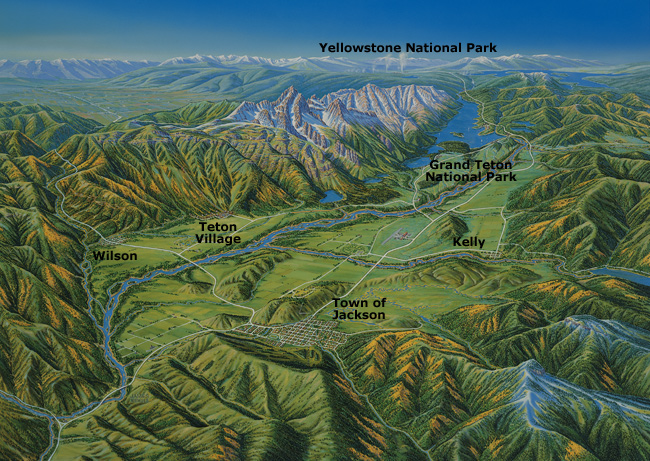 Jackson is the seat of Teton County, which was created in 1921, over thirty years after Wyoming became a state in 1890.  As of 2000, Teton County had a year-round population of about 18,251, and Jackson had a population of 8,647.  A number of temporary residents swell the population totals during the tourist seasons – in the summer months by 52,000 and by 5,000 in the winter months.  The county has a large land area – 2,697,000 acres or 4,214 square miles.  Nearly 97% of the county is public land, which means it belongs to you and me instead of individual or private property owners.

With a great expanse of public land, including two national parks, tourism is the most important industry in the area.  Grand Teton National Park lies in the heart of Jackson Hole, and Yellowstone National Park is only a few miles to the north.  The town of Jackson serves as a gateway to both.  In 1999, Grand Teton National Park enjoyed a total traffic of 4,160,303 visits.  The total indicates the popularity of the area and the health of the industry.  A few ranches remain in operation in the valley, reminding the residents of the area's original economic base.  Many of the ranch operations, however, supplement their income with tourism, as guest ranches and headquarters for outfitting hunters and fishermen.

The Teton County School District serves approximately 2,265 students, K-12.  School facilities range from small rural schools in mountain communities to a new middle school, built in 1992, and an even newer high school, completed in 2000.  Students participate in a wide range of activities from debate and drama and music to skiing and soccer and other sports.

Reservation agents are online and ready to help. Would you like to start a chat?