St. Louis has the Gateway Arch, New York the Statue of Liberty, Seattle the Space Needle, but when you are in Jackson and need a picture to prove to friends and family that you were indeed here, you snap a selfie in front of the Jackson Hole elk antler arches on the Town Square. In fact if you’ve just ever casually strolled by the famed elk antler arches, there’s a good chance that you are in the background of some other tourist’s selfie, so make sure to always smile when you walk by. You know just to prove that the natives out west are indeed friendly. 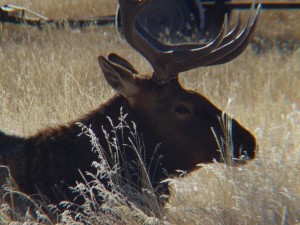 Well, first of all to make an elk antler arch you are going to need to some antlers. Luckily there just happens to be the National Elk Refuge literally right down the street from the Town Square. With an estimated local elk population herd of 11,000 or roughly an elk for every man, woman, and child in Jackson, this guarantees that the antlers don’t need to be Amazon Prime’d and come straight from the valley.

The male elk grow antlers to basically try and impress the female elk and to fight with other males, which they hope the females are paying attention to. It’s a testosterone thing that makes them grow and then drop off. Antlers are made of bone and can grow up to an inch a day. They naturally shed their antlers when their testosterone drops after breeding season. Or because they need to keep up with the next season’s antler styles, you know to once again impress the females and start the whole process over again. During antler shedding season you pretty much can’t walk on the elk refuge without tripping over an antler and people collect them to sell at auctions. 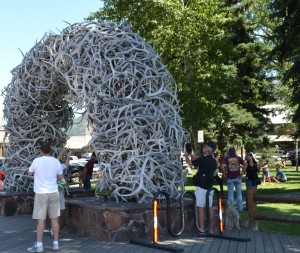 George Washington Memorial Park is the official term for the Town Square, but no one really refers to it as such. It’s kind of a teeny-tiny Central Park in Jackson, as it sits right smack in the middle of town. “Central Park West” or officially George Washington Memorial Park was dedicated as a park in 1934 to commemorate the 200th anniversary of our first president’s birth. The antler arches would have to wait almost 20 years until the Town Square was completed with its current iconic and selfie approved look.

In the middle of the Washington Memorial park you’ll find a statue of, you guessed it John Colter. Colter was a member of the Lewis and Clark expedition and the first non-native to enter the region that would become Yellowstone National Park and to lay eyes on the Tetons. He’s often thought of as the first mountain man ever and is considered a local legend and all around badass around these parts. Washington on the other hand for all the great he did for this young nation, never ate a Billy’s burger, skied some cowboy pow, or even so much as set foot in the state of Wyoming as he died before the equality state even became a state. 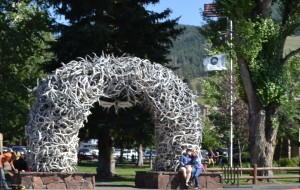 The first elk antler arch was constructed in 1953 by the Jackson Hole Rotary Club. The other corners of the park would eventually be adorned with arches, with the project being completed by the close of the 60’s. A base was constructed and three local Jackson men built a steel frame, which allowed the Rotary Club to stack the antlers. The club used over 2,000 antlers and spent half a day stacking them to complete the first arch. They called it a day at 4:30pm, and at 4:35pm it’s rumored a tourist from Wichita, Kansas snapped the first antler arch selfie with a Polaroid. The Rotary Club rather pleased with their efforts retired to the Wort Hotel to celebrate with their wives over drinks and dinner.

The arches that followed, each contained around 2,000 antlers. Although antlers are strong and made of bone, all elk know that they are only supposed to be worn for a season. The elk antlers in the arches have eventually worn down from sun damage and cold temps and began to be replaced in 2006.

The town of Jackson and the Rotary Club of Jackson Hole began to auction off the original arches in 2006. The old arches could be dismantled, moved, and reassembled, all included in the auction price, to the new owner’s place of choosing. Or the new owner could sell the antlers at the going rate per pound, which at the time was $7 a pound and now is currently more than double that. In 2006 the Rotary Club also held a contest for people to buy tickets to guess how many antlers were in the arch being auctioned. No word on who won, they must still be counting.

2015 marked the completion of the final arch reconstruction. The previous arch sold for the price of a high priced luxury sedan. Which considering the fact that the arches become available at auction about every 50 years, makes for a good investment and leaves one to wonder how much the next batch of arches will go for. The current set of arches on the square have a street price of around $450,000 worth of antlers in them. If elk knew how much their discarded antlers went for, they might not be so quick to get rid of them. Anyway, just a few things to think about when you are waiting to snap your picture in front of Jackson’s golden arches.